Observing Hope in a Crazy World

I am, by nature, kind of a “half-empty” person—at least, I think so. I try not to be, but so far, I’ve not been entirely successful in kicking the “negative thinking” habit. 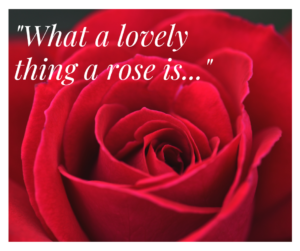 To combat this, I’ve decided to start a regular blog the title of which, Hope from the Flowers, is taken from a Sherlock Holmes story called “The Naval Treaty.”

If you haven’t noticed from my books published so far, I am a Sherlockian (that is, an aficionado of Sherlock Holmes). I discovered the character in high school, and I thought his way of observing the world, his “science of deduction,” to be fascinating. Me…my observation skills are abysmal. My husband likes to tease me by often saying I “failed my observation roll” (a Dungeons and Dragons reference, maybe I’ll explain later). In any case, the ability to see details that others couldn’t was a trait I’d always admired.

In this story, Holmes breaks away from the discussion of the case to notice a wild rose, and to the shock of everyone in the room, goes completely off topic. Here’s the scene (as told by his friend, Dr. Watson):

“What a lovely thing a rose is!”

He walked past the couch to the open window and held up the drooping stalk of a moss-rose, looking down at the dainty blend of crimson and green. It was a new phase of his character to me, for I had never before seen him show any keen interest in natural objects.

“There is nothing in which deduction is so necessary as religion,” said he, leaning with his back against the shutters. “It can be built up as an exact science by the reasoner. Our highest assurance of the goodness of Providence seems to me to rest in the flowers. All other things, our powers, our desires, our food, are all really necessary for our existence in the first instance. But this rose is an extra. Its smell and its color are an embellishment of life, not a condition of it. It is only goodness which gives extras, and so I say again that we have much to hope from the flowers.”

That little scene struck me (as it did the other characters in the scene) because it was so incongruous. It was out of place. But…often hope is out of place. It comes to us when we least expect it, and often when we need it most.

This blog is about moments like that…little extras that give us hope. I want to catch, at least once a week, a glimpse of hope somewhere to compel myself to look outside the rampant negativity in our culture today to see signs of Divine Providence like Sherlock Holmes did here.

As a Catholic, I believe God cares about us. And I think Hope, the second of the big three cardinal virtues, comes through these little moments of Providence. We simply must observe them. So, as I see them, I’ll share them with you. Ultimately, I hope to stop being a “half-empty” sort of person and become one that is usually more than half-full of hope and maybe joy.

Get updates and free stuff!